So I’ve talked before about how many glaring errors and issues I see in the stuff I make, and how much I struggle not to point them out. While my month of enforced not doing that is over, I do plan to loosely carry on with it.

Because it turns out that what other people pick up isn’t the same as what you pick up.

I had to post a few pictures I wasn’t happy with, during my month of no mistakes, and it was hard to convince myself. I hid one completely until the last day, when I decided to be brave and show it to one person.

Another was my second contribution to Inktober, a drawing based on a photo I took of my cat playing with a feathery toy. I hated it. It didn’t look, at all, like the drawing I saw in my head. My cat is by far the cutest cat in the world, and I didn’t see that in the image I’d produced.

But it’s Inktober, and I was struggling with a high-pain day, and I was characteristically already a day behind… So I put it up on Instagram and got to work on the picture for day 3.

Here are the comments for that picture: 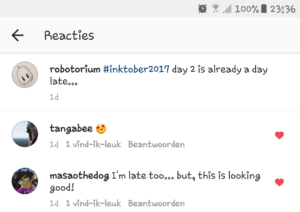 And, from an Inktober thread in a Facebook group: 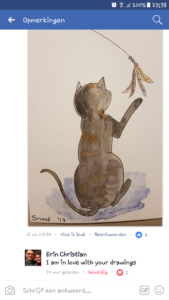 I really disliked that painting. I can see a tonne of things wrong with it. But others commented to say they loved it. And it’s a recurring theme; I make something that I consider substandard, and someone or several someones tell me that they adore it.

We often hold ourselves to much more rigorous standards than we would apply to anyone else.

So post your work. Share what you’ve made. You might not like it — but someone else will. And in a year, or six months, or even just one, you’ll have a record to look back on, to see how you’ve improved and maybe to look at it afresh and see that it was good enough all along.

4 thoughts on “Eye of the Beholder”