I built a pinhole camera from a kit earlier this year, and honestly it was one of the most rewarding things I’ve done – it immediately became my favourite camera because I built it, and because pinhole photography is just enormously fun. One of the big draws was that the kit was easy to assemble and the instructions were clear, so (foolishly, perhaps) I bought the Lomography Konstruktor kit when I found it on Amazon, reasoning that if building one camera was fun, building another could only be the greatest idea I ever had.

It’s worth noting that I have arthritis and that it affects (among other bits) my hands, a factor I did not consider even a little bit when buying the kit, because I will literally never learn to consider my disabilities in my plans. 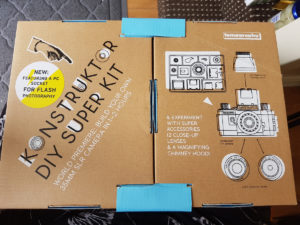 The kit looks super fun from the outside, and I am overly excitable, so…

I opened it immediately. At first glance, it all looks well-organised and well laid-out. Here is a list of things you need to make this camera:

The kit claims to take 1-2 hours. It took me 4, and I’m reasonably good at sticking stuff together. 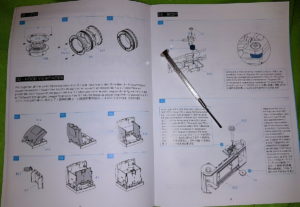 They did provide a tiny screwdriver, and I’m a sucker for free tools, which is why IKEA owns my soul, more or less (don’t worry – joke’s on them; it’s a pretty shoddy one). Unfortunately, they also provide a variety of absolutely sinfully tiny screws, some of which are, as far as I can tell, functionally identical despite being marked as different in the instructions. 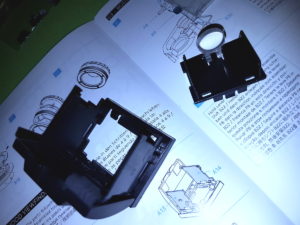 The first three steps are for putting together this contraption, which is kind of your viewfinder (mine also came with a chimney style thing, which is what I actually use – my eyes are terrifically shonky and can’t make use of the contraption above, whose name I have clearly forgotten). Immediately, my croggled cripplehands were a problem. The idea is that you have a single base, to which you attach 3 “walls” and a lid. Every single one of those was incredibly difficult for me to click into place. I managed, but my fingers and thumbs paid for it. Here it is fully assembled: 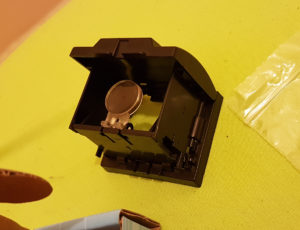 This is also when it became clear that the instructions are… let’s say “cursory.” More than once, I had to disassemble something I had just put together, because the instructions didn’t specify which way something needed to be attached and it wasn’t apparent until I’d done it wrong. 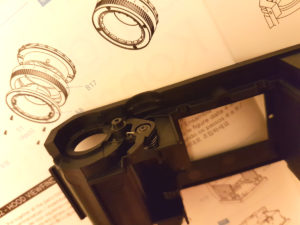 Despite my bitching about the instructions, this kit was actually immensely satisfying to put together. The assembly above is an excellent example. Looks more complex than it is, easy enough to build, and works. I honestly can’t tell you how pleased I am with the entire project – including the time I spent sobbing and swearing because I couldn’t click a thing into place. Sure, there was a modicum of suffering, but it really was worth it, as far as I’m concerned, and it took less than a day for me to fill a roll of 35mm film because I fell in love with it as I built it and it got even better when I got to take a photo with it for the first time. 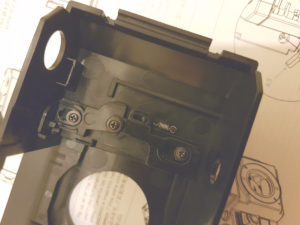 See that tiny spring? That’s where your tweezers, needle, or pin comes in. I used tweezers (but wished for a pin, which I think would be easier), to stretch it and hook it over the tiny plastic outcropping. 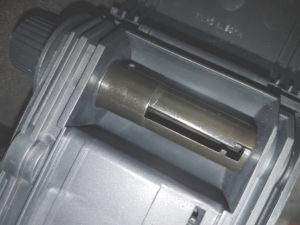 This bit was completely impossible with my rubbish fingers, so I devised a plan I highly recommend. See how the uptake spool is squeezed together? The hole it sits in at the bottom is too narrow for it, unless it’s squeezed like that. My fingers don’t fit around the spool – I struggled. This was the sweary bit (I may have lied about the tears). Honestly, I thought about putting it all aside and trying again the next day, but I’d decided I was finishing it, so…

The trick is to wrap the spool so tightly in masking tape that is is squeezed as far as it possibly can be, insert it where it belongs, and rotate it to gently pull off the masking tape. Hey presto. One of those creative solutions you can be smug about for years.

Things to be aware of: 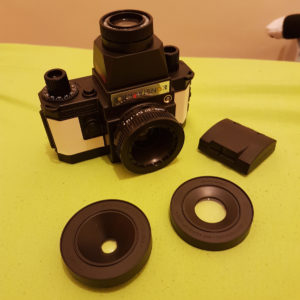 I stuck the Konstruktor label on the front of mine as intended, but upside-down with some vague notion of having it be easily recognisable if I ever find myself in a situation where many Konstruktors are confused with each other and I have to pick mine out. That’s probably unnecessary.

Overall, ease of the kit is 5/10 – the easy steps are incredibly easy, the hard steps are frustrating as fuck. The instructions, as mentioned previously, read more like a reference guide for someone who’s done it 12 times and just needs to remember the correct order.

But the resultant camera is much, much better than that. Here are some photos I took with it: 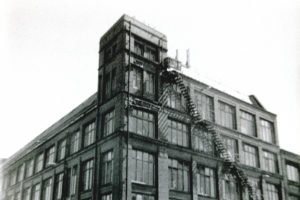 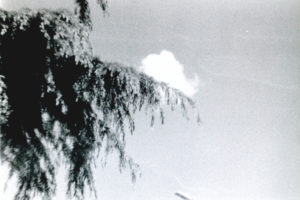 There is a bit of a learning curve (read: I’ve cocked up every macro photo I’ve tried to take with it so far) and I’m looking forward to getting better at it, but it’s intensely rewarding right from the off. Not quite my new favourite (the guessing game of pinhole photography is still in top spot), but definitely on the shortlist.